In Carrboro cartoonist Max Huffman’s comics, a quick, wry, referential humor bops across the panels. The dialogue’s snarky and glib, the tempo happy to spin you. If set to soundtrack, think “groovy”—George Duke, Lonnie Liston Smith, Tim Maia. More Archie than Foxtrot, more Nancy than Garfield, more the grit of Paul Auster and delicious oddity of Jhonen Vasquez than any Dilbert cartoon. Like the shady, smirking Career Criminal character on the cover of Max’s new book (Cover Not Final), it works well to approach Max’s work with a mischievous smile.

Max has been illustrating, writing, lettering, and designing—i.e. creating cartoons—his entire life, embracing the work to the point that it’s, as he describes, the only thing he’s ever cared about doing. Plus, there’s no way forward like jumping in with two feet, full submersion into the pool. “I only applied to one college because it was in New York and offered a comics program. No one needs a diploma that says cartoons, obviously, and the elephant in every classroom was the fact that it’s rarely a viable career. But I still got a lot out of that experience and brought it home with me to Carrboro.”

After a BFA from New York’s School of Visual Arts, tutelage under cartoonist Gary Panter, and publication of five mini-collections, Max has published his first full-length collection: (Cover Not Final) from AdHouse Books. The stories of (Cover Not Final) were honed over the course of six years and finalized during the isolation months of Covid. Max notes that almost all of these stories began as quickly jotted notes of phrases, moments, and moments of ideas jumbled in a doc on his iPhone. Over time, patterns and characters accrued to the point that these notes “congeal into a story.”

In particulars of the physical comic creation process, Max describes it as follows: “I try to draw page layouts and sketches beforehand but more often than not I have to map it out right on the bristol with pencil and dip pen. Which means I’ll usually end up drawing a page more than once, or get a few pages in, figure something out, and have to start over. Everything up to and including lettering is totally analog. Then I scan, clean and color in Photoshop.” 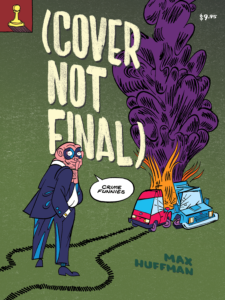 In subject, (Cover Not Final) is a collection of short stories billed as “crime funnies,” “paranoid conspiracy,” and “soft-boiled noir.” Max notes that conspiracies, cults, and liminal spaces hold power, and buses and basketballs repeatedly pop into the scene. The stories take place in a, well, cartooned spin on Research Triangle Park monikered “Business Park”—a grating commercial-city-combo-home Max describes as “corporate headquarters and tech campuses [that] have been reverse-gentrified into an actual city.” City reclaiming the businesses, vs. businesses overgrowing the city. Max’s parody of corporate culture fits well with the tone expected in an embrace of the noir genre, adding a good dose of grit and underlying disillusionment to the characters’ plights. Given the almost flash fiction quality of the shorts, however, we the reader never have to be immersed too deeply into the sad capitalist scheme—it’s all more of an eerie atmosphere surrounding the show.

In delightful vignette-fashion, the short stories feel layered, as if each is happening simultaneously rather than in a linear timeline. In similar texture, the artwork lines are firm and angular, renditions of people and faces almost cubist. Max notes that he thinks a lot about the implementation of time in his comics. “Most comics take a very long time to make and a very short time to read. You’re placing all the control in the reader’s hands, and no matter how much work and thought you put into pacing, it’s ultimately completely up to each person how fast they’re going to blow through a comic.” Still, he’s keenly aware of how form can shape experience. “The visual rhythm of a comic’s panels can mirror the timing of comedy in other mediums,” Max explains. “Both involve a lot of misdirection — tricking the audience into understanding something the way you want them to.”

Through the tempo and layered texture, Max explains that “the vignettes are tied together by the various grifts, hustles and conspiracies that animate their shared setting, and the central character of the Career Criminal, who sets them in motion.” The stories are peppered with many oddly-named characters like Career Criminal, Doctor Website, and Man Detective, but while their names elicit a tongue-in-cheek tone, the personalities’ emotions and situations ought to be taken seriously. And it’s all a bit of mix between oddity and credibility that we live in anyway, now isn’t it?

An exhibit of original artwork from (Cover Not Final) will be displayed at Peel Gallery in Carrboro June 27th to July 4th. Be sure to check out the opening party celebrating Max’s new book and show on the 30th, timing details forthcoming.

Learn more about Max Huffman and his artwork at his website, MaxHuffman.com. Purchase his new book (Cover Not Final) locally at All Day Records, Flyleaf Books, and Peel Gallery.