Appointed by the Orange County Board of County Commissioners, the Arts Commission Advisory Board consists of 15 Orange County citizens over age 18 who help to steer the commission’s future and provide suggestions to the BOCC on arts & culture issues. The advisory board meets the 2nd Monday of each month (except for December) at 6:30 pm, alternating between the Eno Arts Mill in Hillsborough and Peel Gallery in Carrboro.

Click here to view the 2022 Meeting Schedule and meeting archives. Fred Joiner is a poet and curator living in Carrboro, NC, where he currently serves as the Poet Laureate of Carrboro. His work has appeared in Callaloo, Gargoyle, and Fledgling Rag, among other publications. Fred is a two-time winner of the Larry Neal Award for Poetry and a 2014 Artist Fellowship Winner as awarded by the DC Commission on the Arts and Humanities. One of Fred’s poems won the Smithsonian’s National Museum of African Art’s Divine Comedy Poetry Contest, in response to Malian artist Abdoulaye Konate’s textile work. Most recently, Fred was selected as one of 13 recipients of the Academy of American Poets’ inaugural Poets Laureate Fellowship. Anita Mills was born in Lubbock, TX in 1952. She attended public school there, eventually earning a BFA in Ceramics and Printmaking from Texas Tech University. After completing her MFA in Studio Art and Art History from the University of Texas at Austin in 1977, she took a teaching position at St. Cloud State University in Minnesota. During her 12 years at St. Cloud, she taught all levels of design, drawing, painting, printmaking, theory of art, and “Women Artists: An Historical Survey.” She concluded her tenure there as Chair of the Art Department. A resident of North Carolina since 1989, Anita currently lives near Hillsborough where she maintains her home and studio. She is a full-time artist and teaches adults and young adults through workshops and courses offered in community education settings. A long time Orange County resident, Linda currently lives in the western part of the county with her husband and son. She lived in Hillsborough from the 5th grade through her college years at UNC-Chapel Hill. At Orange High School, Linda was very active in the theatre program and carried this passion to UNC where she double majored in theatre and mathematics. After finishing her undergraduate degree, Linda completed a year-long internship as company manager at Playmakers Repertory Company. She also completed an internship as company manager at the NC Shakespeare Festival in High Point, NC before attending the University of Cincinnati where she completed a Masters in Arts Administration at UC College Conservatory of Music, and a Masters in Business Administration from UC Lindner School of Business. While there, she worked at the Cincinnati Playhouse in the Park and was a founder of a community music series. Though she changed from being an art administration professional to working in the corporate world, Linda is still an arts patron and enjoys all the arts available in Orange County. She is excited to help support the Orange County Arts Commission in its mission to promote and strengthen the artistic and cultural development of Orange County, NC. 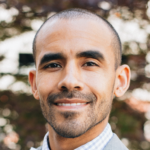 Sean Bailey is a photographer and print maker currently living in Hillsborough, NC. His innate desire to study and understand the world’s natural and cultural complexities led him to degrees in zoology, anthropology, and a doctorate in genetics & molecular biology. Sean is a strong advocate for learning and conserving traditional light sensitive printing techniques. He is thankful to serve on this board and looks forward to opportunities that build life-long relationships between artists and their communities. 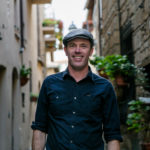 John Claude Bemis is the award-winning author of seven books for young readers including The Wooden Prince (Disney-Hyperion) and The Nine Pound Hammer (Random House). He was selected as North Carolina’s Piedmont Laureate for Children’s Literature in 2013 and received the Excellence in Teaching Award from UNC-Chapel Hill for his work as an author-educator. He leads writing workshops and story consultations for adults, kids, and teens. John is also a visual artist and songwriter who performs with his band Hooverville. He lives with his wife and daughter in Hillsborough. johnclaudebemis.com Growing up, Mark developed a passion for music after discovering the Beatles and Neil Diamond in his father’s 8 track collection. Air strumming eventually led Mark down a musical path starting with the piano and then the drum set to the chagrin of the neighborhood. Mark pursued his passion for music and graduated from the Berklee College of Music and Suffolk University’s Sawyer School of Business where he earned his MBA. A native new Englander who loves “chowda”, Mark and his family relocated to North Carolina to start careers at Duke University where Mark served as the Divisional Administrator for General Internal Medicine. Mark has served as the Deputy Director for the ArtsCenter in Carrboro, NC, a unique role that blends administration and creativity, for the past year and a half and has focused on the development of new staff, updates to programming and a new ArtsCenter building scheduled for residency in 2023. Krista Bremer is a published author and also associate publisher of The Sun, a Chapel-Hill based literary magazine that goes out to about 70,000 subscribers around the country. She has taught memoir at the Center for Documentary Studies and has organized panel discussions at Flyleaf and elsewhere in the county. For the past twenty years, Krista has been steeped in literature locally and nationally. Her writing has won a NCAC Arts Fellowship and she has served on the committee to select future recipients. Krista’s work has also won a Pushcart Prize, a Rona Jaffe Award, a Breadloaf scholarship, and other accolades. Saba Jordan is a Visual Artist born in Santiago, Chile. His work has been exhibited in the U.S. and Canada, where he lived for a decade. He holds a B.A. in Sociology from York University. Saba is a strong believer in the power of the Arts as an essential aspect of a healthy and vibrant community. He is grateful to be part of this board and views this as an opportunity to create meaningful relationships, while supporting the growth of underrepresented Artists in the Triangle area. Saba’s work can be viewed at Peel in Carrboro, NC where he currently resides. Lindsay Metivier is a photographer, an educator, an independent curator, and a gallerist based in Carrboro, North Carolina.  She holds a BFA in both Photography and Art Education from the Massachusetts College of Art and Design and an MFA in Studio Art from UNC-Chapel Hill. From 2011 until 2021 Lindsay owned and directed a gallery called Aviary in Boston, Massachusetts. Lindsay recently opened an art space (called Peel) in Carrboro, North Carolina. Peel is part gallery, part digital photo lab, part art book store, part gift shop, and also a community event space. Her work has been exhibited widely, most recently at Lump Gallery, Block Gallery, Oneoneone Gallery, The Nasher Museum at Duke University, The Ackland Art Museum at UNC-Chapel Hill, The John and June Allcott Gallery, The Front Gallery, and Transmitter. Her work has been featured on The Heavy Collective, Humble Arts Foundation, and A New Nothing. Brad was born in Nashville, TN, graduated high school in Cincinnati, OH, and earned his B.A. in Fine Art from The University of Mississippi in Oxford, MS. He spent many years working as a gigging musician in various cities across the deep South before making his way up to North Carolina in 2010 where he has since served as the drummer for too many bands to list here. Upon settling in the Triangle, Brad stepped into a leadership role at The ArtsCenter (Carrboro), working as Concerts Director and then Managing Director, curating and facilitating hundreds of arts experiences each year. After eight fruitful years, he left this role to pursue work that gave him the flexibility to further grow as a professional working musician and artist in his own rite. Prior to the pandemic, he worked in artist management for Five Head Entertainment, handling Watchhouse and Michaela Anne (both Yep Roc artists), among others. He currently utilizes his skillset as the Marketing Coordinator for Emerson Waldorf School in Chapel Hill while continuing to pursue his passion. Brad’s 20+ years of experience in the arts community as an artist, musician, venue manager, artist manager, and booker has not only helped him forge many relationships within the industry both locally and nationally but has also given him a unique perspective on the ever-changing landscape facing creative professionals today. From a young age, creativity has been a driving force in Sarah’s life. She loves watching an idea grow with creativity to influence and change the world around it. She has had the great opportunity to be a part of arts organizations (museums and nonprofits), and for-profit marketing teams. These two avenues in her life came together in her graduate work at Boston University (MS Arts Administration). After graduation, she worked with the United Arts Council of Raleigh and Wake County as their development manager. She is currently the owner of Cardinal Fern Marketing, a small marketing company that focuses on providing digital marketing services for small businesses and nonprofits. She believes in the power of the arts, and the positive influence it can have on a community. She is passionate about bringing the arts to all communities, and removing the barriers of entry for everyone to experience the arts. Marlon Torres is the Executive Director of North Carolina Arts in Action, an organization that uses dance, music, and performance to instill self-esteem, perseverance, and excellence in children. Marlon began his career as a principal dancer in Mini Pops – a highly-rated Venezuelan televised dance ensemble featuring child performers, which enchanted millions of loyal viewers in Venezuela and the Caribbean. As a former principal dancer of the international modern dance company, Galumpha, Marlon created and performed award-winning choreography showcased around the world. He has performed dancing roles on stages throughout the Americas, Europe, and Asia. Marlon is a certified project management professional, has a BA in theatre and dance from Binghamton University, and an MBA in marketing from the University of Leicester in the UK. Marlon joined the Downtown Durham Rotary Innovation Fellowship class of 2017, was the recipient of the Diamante Latino Award 2017, and the 2018 winner of the Triangle Business Journal 40 under 40 Award. Crystal, a pianist, teacher, and collaborative artist, has been committed to the arts from an early age, filling her time with piano, violin, and ballet lessons.  Her love for music never faltered as she went on to earn her BM in Music Performance from UNC-Chapel Hill where she was a recipient of the prestigious Kenan Music Scholarship. She continued her studies and received a Master of Music degree in Piano Performance and a Doctorate in Piano Performance and Piano Pedagogy from the University of Georgia. Returning to Chapel Hill in 2019, she currently serves as the marketing and development communications manager for Arts Everywhere at UNC-Chapel Hill, where she strives to share, promote, and amplify all the wonderful arts opportunities in the community.